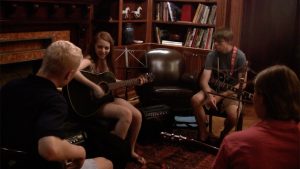 lon.  At the time I had many students who were able to play the guitar pretty well. However, because of their busy lives, most of them didn’t get together to play with friends or peers.  I believe that playing with others is essential to becoming a good musician.

Guitar lessons are only the first step!

Practicing one’s lesson is just a part of learning music.  People talk about music as being the universal language, the ultimate purpose being communication with others.  It is only in playing with others that we internalize the necessary skills and reflexes to play with others and for others.  Part of the joy of making music is the give and take, the exchange of ideas on and off the stage.

The idea for a Salon came out of a need. At one point I was teaching two young singer/songwriters. I also had a few young players who were able to get around on their instruments pretty well.  It seemed like a logical next step to organize a session where these students could play together.  We could have a kind of organized jam session.

My students and their parents greeted my idea with enthusiasm.  One of the parents kindly offered the use of a floor of her brownstone for the event. So, on a Sunday afternoon in May, I met with approximately 10 kids for  the afternoon.  I divided the students into two groups and assigned each group a song to work on.  Each group had its room to rehearse in, and the parents hung out in the living room.  The kids rehearsed their song for 30-40 minutes, at the end of which time they presented the song for the parents.  My input was minimal.  The point was to get the kids to work together.

My Salon did what I intended it to do.  It was great to see the kids share their knowledge, come up with arrangements on their own and collaborate to make the song work.  Working with each other gave them the ability and confidence to overcome any shyness or insecurity.  And, most importantly, they had fun!

Up to now, I have organized 3 separate Salons and hope to do more.  Here is an excerpt: